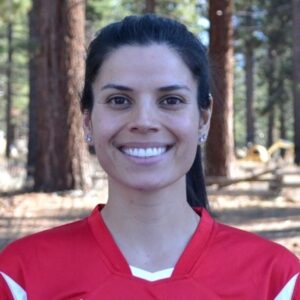 Spent her youth club career with Placer United from U11 - U16. Won the US Club Soccer National Championships in 2008. Member of the Cal-North ODP Team. Leading scorer as freshman and sophomore on high school varsity team. Left soccer at 16 to focus on cross country and track & field. Recruited to run for the University of Nevada, Reno distance team. Struggled with injuries freshman year and as a sophomore, took a year away from competitive sports. Junior year she found the UNR women's club soccer team and fell back in love with the sport. Qualified for regionals in 2013, 2014, and 2015. Graduated with a B.S. in Mathematics in May 2015. After college, played pre-season with the Seattle Sounders women. Played two seasons with the California Storm. Hobbies include reading, working out, skiing, and spending time with friends and her cat, Mo.